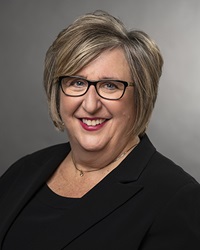 Deacon Sue E. Rothmeyer was elected Aug. 9, 2019, to a six-year term as secretary of the ELCA by the Churchwide Assembly in Milwaukee.

Secretary Rothmeyer earned a Master of Arts in communication arts and rhetoric from the University of Wisconsin–Madison in 1984, and a Bachelor of Arts in English and speech communication from Luther College, Decorah, Iowa, in 1981.

Secretary Rothmeyer serves as the ELCA representative to 1517 Media, Portico Benefit Services and Luther College Board of Regents; is a board member of Concordia Place in Chicago; and is a member of the National Association of Parliamentarians.

Office of the Secretary