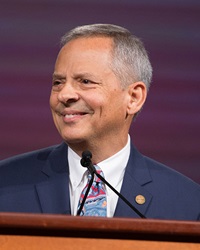 After choosing not to seek reelection, Peña was succeeded by William “Bill” Horne II at the 2016 Churchwide Assembly in New Orleans. Horne passed away unexpectedly on Aug. 14 in Clearwater, Fla. The Executive Committee of the ELCA Church Council, acting on Presiding Bishop Elizabeth Eaton’s recommendation, appointed Peña as interim vice president of the ELCA on Aug. 24, 2021.

Peña was born April 25, 1953, in Houston, Texas. He attended Galveston public schools, graduated from Ball High School and received a bachelor’s degree in music education from the University of Houston in 1976.

Peña returned to Galveston and soon joined Kleen Supply Co., his family’s business distributing janitorial supplies and equipment. Since then, Kleen Supply has grown with the acquisition of other regional competitors and now operates throughout Texas. Peña also serves on the Texas First Bank board of directors.

Peña has extensive experience in the church. He was president of First Evangelical Lutheran Church of Galveston from 1989 to 1995 and vice president of the ELCA Texas-Louisiana Gulf Coast Synod from 1991 to 1995. In 1993, he was elected to serve a six-year term on the ELCA Church Council and was on the its executive committee. He presently serves on the Luther Seminary board, Texas Lutheran University corporate board, and the Lutheran Immigration and Refugee Service board. He also serves on the Central Committee of the World Council of Churches, having first been elected in 2006.

Peña resides in Galveston and is married to Diane, a former teacher and administrator in an Episcopal school. They have two children, Steven and Stephanie, along with four grandchildren: Bryson and Asher Peña, and Edie and Charles Frye. They are still members of First Evangelical.